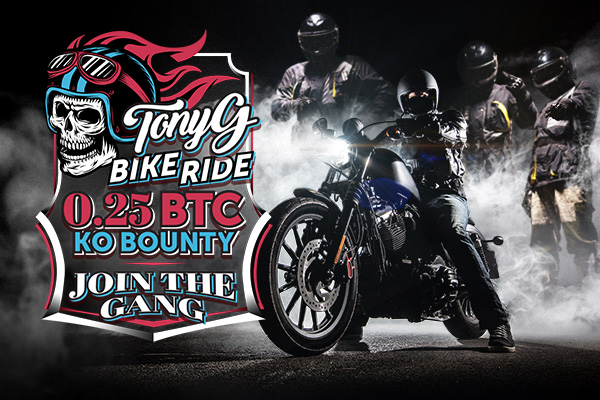 Time to unleash your inner Shark! Our Community had so much fun riding with TonyG during the first Bike Ride event that we had no other choice but to.. Run TonyG Bike Ride again.

You heard it right, the poker legend TonyG will be there waiting for you every Sunday at 04:30 GMT. The prize pool will be set at 500,000 CHP GTD, but that’s not all: If you manage to knock TonyG out of the event, there’s a tasty prize in it for you – a massive bounty of a 0.25BTC!

On top of that, there will be a second event later that day, the NoMercy Shooting Star which will see Isabelle Mercier playing. Knock her off her star and you will earn a bounty worth 0.1BTC!

Ready to be the one to send TonyG on his bike? Then read on!

Buy-in to enter the TonyG Bike Ride is set at 10,000 CHP. Sounds like too much? We got your back again: Satellites will run daily with a price tag set as low as 100 CHP!

To make sure you have as much fun as possible, the Bike Ride and Shooting Star event will be accompanied by 3 other events. The full schedule is as follows:

NOTE: To qualify for the bounty, you must eliminate the player named „TonyG” from the TonyG Bike Ride tournament, after the re-buy period has ended.

To qualify for the bounty on NoMercy you must eliminate the player „NoMercy” from the NoMercy Shooting Star tournament after the re-buy period has ended.

Winners will be contacted via their registered e-mails and all bounties will be paid to their provided BTC wallet addresses.